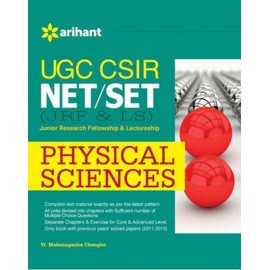 In order to ensure minimum standards for the entrants in the teaching profession and research, the University Grants Commission (UGC) conducts the National Eligibility Test (NET) twice a year to determine eligibility for lectureship and for award of Junior Research Fellowship (JRF) to Indian nationals. UGC NET tutor Physical Sciences has been revised as per the new syllabi and examination pattern issued by the UGC for Physical Sciences.
The book has been divided into 42 Chapters according to the syllabus of Physical Sciences. The chapters namely Dimensional Analysis, Vectors and Matrices, Linear Differential Equations and Special Functions, Fourier Series and Laplace Transform, Complex Analysis and Probability, Greens Function and Partial Differential Equations, Numerical Methods, Tensors and Group Theory, Newtonian Mechanics and Rigid Bodies Dynamics, Lagrangian and Hamiltonian Approach, Special Theory of Relativity, Basic Electrostatics and Magnetostatics, Time Varying Magnetic Field and Maxwells Equation, Propagation of EM Waves and Gauge Transformation, Electromagnetic Field and Dynamics of Charged Particles, Dispersion and Relativistic Electrodynamics, Wave Mechanics, Matrix Mechanics, Perturbation Theory and Variational Principle, Identical Particles and Spin, Scattering Theory, Relativistic Quantum Mechanics, Thermodynamics, Classical and Quantum Statistics, Phase Transitions and Magnetic Properties of Matter, Bose - Einstein Condensation and Process, Semiconductor Devices, Operational Amplifier and Digital Electronics, Digital Converters and Microprocessors, Experimental Methods, Measurement Methods, Fourier Transformations and Frequency Devices, General Atomic Spectroscopy, Coupling and Effects of Magnetic and Electric Fields, Vibrational, Rotational Spectroscopy and NMR, Lasers and Coherence, Crystal Structure and Specific Heat of Solids, Thermal Conductivity and Theory of Superconductors, Crystal Defects, Basic Nuclear Properties, Nuclear Models and Radioactivity, Nuclear Force and Deuteron Problem and Particle Physics.
More than 4000 previous years objective questions from 2011 - 2014 have been covered chapterwise. Some specific facts have been covered in a box and through pictures for better understanding. Also last four years (2011 - 2014) solved paper of UGC NET Physical Sciences has been given to help candidates understand the recent exam pattern. Separate exercises for Part B and C have been provided in the book. Detailed and authentic solutions for all the previous years questions have been provided at the chapter end. The book also contains various types of objective questions based on the latest examination pattern to help the candidates get familiar with the new examination pattern. At the end of the book, Four Practice Papers have been given for thorough practice and self analysis. This book is equally useful for various State Eligibility Tests as well. As the book has been designed according to the latest examination pattern of UGC Physical Sciences, it for sure will help the aspirants climb up the ladder to success.