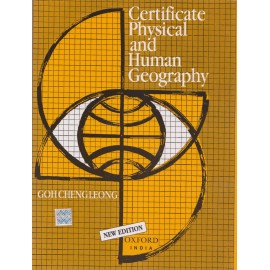 Certificate Physical And Human Geography covers various geographical concepts that are essential for a good understanding of the subject. This book is a good choice for preparing for competitive exams like CSAT.

Summary Of The Book

Certificate Physical And Human Geography provides coverage of fundamental concepts regarding the earth’s topology, the weather and climate, the different climatic regions, and vegetation across the planet. The book is divided into two parts, Physical Geography, and Weather, Climate and Vegetation. Physical Geography covers the various landforms and coastal regions. The second part covers climate and weather related concepts. Physical Geography begins by examining The Earth and its place in the Universe. It then goes on to explore the Earth’s Crust. Then the book looks at the effects that various natural forces have on the Earth’s surface. The book covers natural phenomena like Volcanoes and Earthquakes. It discusses the Weathering Process, Mass Movement, and Groundwater. It proceeds on to cover different landforms and the forces that shaped them. It looks at Desert Landforms, Landforms Made By Running Water, Limestone and Chalk Landforms, and Landforms of Glaciation. It also examines Coastal Landforms, The Oceans, Lakes, Islands and Coral Reefs.

This book covers the physical topography of the planet, the landforms and the oceans, rivers and lakes. This comprehensive coverage helps the readers understand the dynamic nature of the planet, and the forces that shape it. It also discusses the vastly different climate conditions that prevail in different geographical parts of the planet. It is a good textbook to help students understand the fundamental concepts of physical geography and the weather and climate. It is also a good preparation material for exams like the Civil Services Preliminaries. The book contains numerous illustrations, maps, diagrams and photographs that complement the text, and each chapter also ends with a questions section to test comprehension of the concepts covered.

Goh Cheng Leong writes books on Geography and related subjects. He is also the author of Zz Elements Of Geography and Human and Economic Geography.

1. The Earth and the Universe 1 Exploring the Universe2. The Earth's Crust3. Vulcanism and Earthquakes4. Weathering, Mass Movement and Groundwater5. Landforms made by Running Water6. Landforms of Glaciation7. Arid or Desert Landforms8. Limestone and Chalk Landforms9. Lakes 66 General,10. Coastal Landforms11. Islands and Coral Reefs12. The Oceans